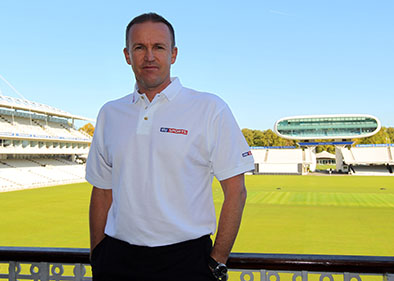 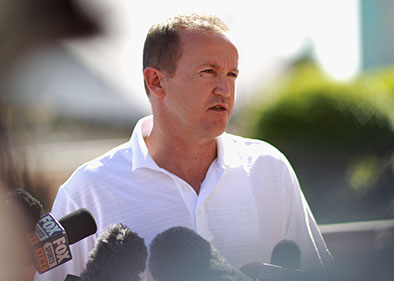 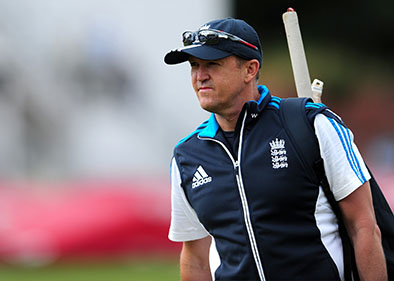 Andy Fowler OBE is a former Zimbabwe player and the former coach of the England Cricket team. The elder of two Test-playing brothers, Andy is arguably Zimbabwe’s greatest ever batsman and still to this day remains the nation’s only batsman that receive comparison to the best to have played the game. A tremendously consistent performer, Flower enjoyed a purple patch in the beginning of the 2000s and is certainly a legend of cricket in Zimbabwe’s history. A tenacious personality, Flower epitomises thorough professionalism and is widely regarded as one of the most stern and prepared coaches in the world. A true cricketing legend, Andy Fowler’s cricketing exploits and reputation lead to his incredible demand as a cricket speaker.

Born in South Africa, Flower is widely regarded as one of the best wicketkeeper-batsman to have ever played the game. Flower’s One Day International debut came against Sri Lanka in the 1992 World Cup and from that day remains in an exclusive group of players that have scored a hundred in their ODI debut. Andy Flower is also the only batsman ever to have scored an ODI hundred on debut in a World Cup match. He amazing however also holds the record for the most number of matches(149) taken to score a second ODI ton after scoring a century on debut, when he did it in only in his 150th ODI.

An incredibly successful performer, Flower also had two stints as Zimbabwe captain, leading his nation to their first Test victory against Pakistan in 1994-95. Flower then historically became the first Zimbabwean to lead a Test tour of England, in 2000 following huge political and social angst coupled with Zimbabwe’s ability that had prevented this. An assured player of fast bowling largely due to his heritage and the experiences from the early part of his career where he played as an opener, Flower matured into one of the best players of spin in the world and historically on a tour of India tour in 2001 made a remarkable 540 runs in the series only being dismissed on two occasions. A quite spectacular achievement, Flower often reminisces on this feat during his work as a cricket speaker.

The leading figure in the Zimbabwe team, it came as no surprise when he was the subject of being targeted by opposition as the prised wicket. Following a phenomenal Test against his native South Africa at Harare in which Andy made 142 and 199 not out, he went on to suffered a rare slump of form, a very rare occurrence during his incredibly consistent career.

Following a hugely turbulent an controversial 2003 World Cup campaign, Andy Flower announced his retirement from International cricket and started an unprecedented protest by along with his equally courageous team-mate Henry Olonga, about what they called the ‘death of democracy’ in Zimbabwe. A political battle that had much more at stake then cricket, Andy Flower speaks of this time and the protest passionately during his work as a cricket speaker.

As a result of his retirement from International cricket, Andy Flower went on to play for Essex CCC in between 2002 and 2006 as well as enjoying a season in South Australia in 2003-04. Having played at the club for a few seasons, Andy was joined at Essex CCC by his brother Grant in 2005 and they went on to become the first brothers to score first-class centuries for the county in the same innings, a feat they achieved against Lancashire CCC that year. But injury ruled him out of the 2007 season, and when the offer came to become England’s assistant coach, he retired and took it.

As a player, Andy Flower played 63 Test matches for Zimbabwe, scoring almost 5,000 runs at a remarkable average of 51.54 to go along with 151 catches and 9 stumpings. His 213 One Day Internationals yielded almost 7,000 runs at an average over 35 and he also took 141 catches and 32 stumpings. Flower holds the Zimbabwean records for the most Test career runs, the highest Test batting average as well as the most ODI career runs. Flower’s fantastic cricketing exploits and career led to him being the only Zimbabwean in the ICC's Top 100 All-time Test Batting rankings, a testament to his wonderful ability. Flower’s score of 232* also remains the record for the highest score as a wicketkeeper in a Test Match.

Initially working as an assistant coach to Peter Moores, just 48 hours after his appointment Flower took charge of the national team following Moores’ resignation. Immediately thrust into the furnace of International management, Flower’s calm yet commanding response to England crumbling to a quiet pathetic total of 51 in Jamaica impressed many and his standing continued to improve throughout the tour.

Flower’s tenure at the helm of English cricket saw the performances and reputation change dramatically. Within his first two years in charge, Flower led England to two Ashes winning campaigns, beating Australia both at home and most importantly away, a rare feat. The teams fortunes and output in the shorter form of the game also changed as Andy inspired the team to achieve an unparalleled level of consistency in 50-over cricket and by doing so delivered England their first global ICC trophy at the World Twenty20 in the Caribbean in May 2010. Despite his already breath-taking achievements, possibly Flower and England’s greatest challenged loomed, a tour of India. During this tour in 2011, England famously beat India 4-0 in a much-anticipated Test series that culminated in them moving to No. 1 in the Test rankings, a remarkable achievement and turnaround and an accomplishment that Flower speaks of with huge pride during his engagements as a cricket speaker.

Continuingly confronted by numerous challenges during in his career, the manner in which Flower took to the England coaching role showed his previous successes in a new and even more flattering light leaving him held in the highest regard in the cricketing world. Presented at last with a team capable of living up to his own well documented and often scrutinised lofty standards, possibly Flower’s greatest strength was the unbreakable bond he forged with captain Andrew Strauss that allowed the pair to and about raising the standards and professionalism on all fronts.

The ultimate perfectionist, Flower’s attention to detail is unrivalled along with his desire to continually improve making him the perfect candidate for his role as the Technical Director of Elite Coaching at the England Cricket Board as well as the head coach of the England Lions. More recently Flower has also worked as a batting coach in the Pakistan Super League for Peshawar Zalmi. An ambassador and patron for a number of charities, Flower has work extensively with Hope for Children and for Factor 50, raising awareness for melanoma, something he had personally suffered with.

A true cricketing legend in all facets of the game, Andy Flower will forever remain the benchmark that all wicketkeeper-batsman are compared against along with the benchmark for England coaches for years to come. The brains behind England’s spectacular transformation, Flower’s cricketing knowledge and experiences are second to none and his intriguing journey in cricket makes for fascinating content. A cricketing genius and tactical mastermind, filled with a host of insightful and mesmerising tales and anecdotes from an action packed career, Andy Flower OBE is certain to be a fantastic addition to any event or function as a cricket speaker.

When he’s at corporate events, Andy is known to cover the following topics: