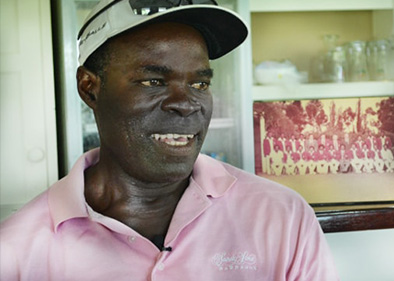 Former Wisden Cricketer of the Year

Franklyn Stephenson is former Barbadian cricket that is widely regarded and arguably the greatest player to never have played for the West Indies following his controversial appearance in the unofficial ‘Test’ and ‘ODI’ matches played between the rebel West Indies team and the then banned South Africa. A remarkable talent, Stephenson played for a host of county teams and displayed true all-round brilliance. The 1989 Wisden Cricketer of the Year, Franklyn’s exploits in South Africa, England, the West Indies and cricket as a whole have led to his emergence as a spectacular cricket speaker.

Stephenson began his cricketing journey in the late 1970’s when he was part of the West Indies Young Cricketers team that toured England in 1978, by 1981 Stephenson had become a First-Class cricketer making his first appearance for Tasmania in October followed by his native Barbados and finally in England for Gloucestershire CCC.

It was a debut the following year however that would shape both Stephenson’s career and life, when he made unofficial Test Match and One Day International debut’s for the rebel West Indies XI against the apartheid banned South Africa team. Franklyn’s involvement within the series along with the remainder of the rebel West Indian cricketers led to them being barred from all levels of West Indies cricket for life, a ban that was eventually lifted in 1989 and which consequently meant Stephenson would never play ‘true’ Test cricket. It is as a result on this constraint put on Stephenson that is he is widely regarded as the greatest cricketer never to have played for the West Indies. During his work as a cricket speaker, Franklyn Stephenson speaks of the burden put on him and his fellow teammates along with provide a unique insight into the forbidden series and the reasoning behind his involvement.

During a glittering domestic career, Franklyn Stephenson played in four continents, during his time in England he was a hugely popular player for Gloucestershire CCC and Nottinghamshire CCC where in just his first season at Trent Bridge he made quite the impression by becoming one of only two cricketers to achieve the coveted all-rounder’s “double” scoring 1000 runs and taking 100 wickets, a staggering achievement and one of which he fondly speaks of during his performances as a cricket speaker. The only other player able to boast such a record is the legendary Richard Hadlee however Stephenson stormed past Hadlee’s record by amassing 1018 runs in addition to 125 wickets and thus being named Wisden Cricketer of the Year.

During his work as a cricket speaker Franklyn humorously shares the fact that he bought up the run-scoring part of his infamous ‘all-rounders double’ by scoring a hundred in both innings of Nottinghamshire CCC’s last match of the season and also took 11 wickets in the match however despite his own truly outstanding all round performance, his team still managed to somehow lose the match by 127 runs.

Regardless of his ban following the West Indies rebellion, Franklyn Stephenson returned to International cricket in 1989-90 playing for Barbados in the Red Stripe Cup before a brief spell with Sussex CCC where he was once again the leading all-rounder scoring over 750 runs and taking almost 70 wickets. A hard-hitting batsman and a right-arm bowler who at his peak was known to genuinely fast, Stephenson is somewhat a pioneer, developing and implementing the slower ball and the first bowler regularly bowl the delivery that is a vital tool on any bowlers armoury in modern one-day cricket. A fantastic career, during his work as a cricket speaker Franklyn often reminisces on his playing days and in particular on his time in domestic cricket.

Following his retirement as a player, Stephenson has worked extensively as a cricket speaker alongside his hobby as a keen golfer and is still one of only two golfers to have recorded birdies on the infamous Extreme 19th in South Africa. A marvellous cricketing talent and wonderful personality, Stephenson’s incredibly charismatic manner coupled with a host of tales and anecdotes to share from his extraordinary and varied career ensure that he will resonate with guests and be the idyllic addition to any event. An astonishing career and personality, Franklyn Stephenson is available to hire as a cricket speaker for any event, cricket function or occasion and will most certainly contribute to an unforgettable experience.

When he’s at corporate events, Franklyn is known to cover the following topics:

To book Former Wisden Cricketer of the Year, Franklyn Stephenson, as the cricket speaker for your corporate event, function or conference, simply contact the Champions Cricket Speakers agency by filling in our online contact form. Alternatively, call a booking agent directly on 0207 1010 553.