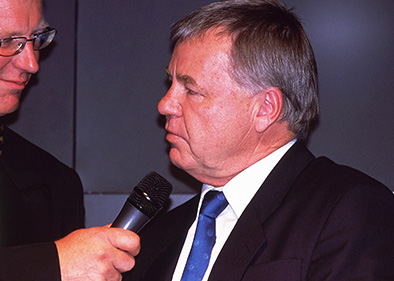 Arguably one of the most natural cricket talents of all time, Mike Procter is a cricket legend and fantastic cricket speaker who is best known for his exploits as a fast bowler and hard hitting batsman for South Africa and Gloucestershire CCC. Prevented from appearing on a national stage due to South Africa’s isolation from the sport in the 1970’s and 1980’s, Mike played for County Championship and became a favourite of Bristol fans due to his huge amount of skill and consistency of performances. An intriguing and insightful cricket speaker, Procter is an incredibly well respected and sought after cricket speaker.

Procter was affected by the ban on South Africa which restricted his Test career to a mere seven appearances, all of which came against Australia inbetween 1967 and 1970. Despite his short time in Test cricket, Procter took 41 wickets at an average of 15 to suggest what he might have achieved in the coming years had South Africa not enacted a racist Apartheid policy, which had their international sporting teams banned. Resorting to domestic cricket as a result of the stipulations put upon him, Procter is the only man to make over 500 runs and take 50 wickets twice in a domestic South African season and also holds the record for the most consecutive First Class centuries. As a cricket speaker Procter discusses his short time in International career as well as the political issues that adversely affected his career.

Arriving at Gloucestershire CCC in 1968, Procter strung together a number of world-class performances and immediately made an impact for his team. Within his first season, Mike almost achieved both 1000 runs and 100 wickets until a knee injury hindered his progress and stopped his progress at 971 runs for the season. During his second season, Procter took 103 wickets and guided Gloucestershire from the depths of county cricket to second in the competition. Mike’s amazing performers led to him being decorated as Wisden’s Cricketer of the Year in 1970 and his performances resulted in comparisons being drawn to the great Sir Garfield Sobers. A renowned cricket speaker, Mike dealt with controversy in order to achieve peak performance on multiple occasions.

In an incredible 13 year career for Gloucestershire CCC, Procter was twice named the PCA Player of the Year and won the Cricket Society Wetherall Award for the Leading All-Rounder in English First-Class Cricket in 1978. As captain he led Gloucestershire to the Benson & Hedges Cup in 1977 as well the Gillette Cup during a time when the club was known as Proctershire due to Mike’s outstanding contributions. During his performances as a cricket speaker Mike reminiscences on his time at Gloucestershire and discusses the factors that allowed him to be so successful.

Mike’s highly successful and illustrious cricket career spanned over three decades. With huge passion and drive to succeed, Mike is regarded as one of the great inspirational cricketers internationally. Available as an after dinner speaker, Procter breaches the subjects of top-flight sport alongside anecdotal tales of what county cricket had to give during the time. Delivering his speeches with great enthusiasm and sentiment, Mike has become highly desirable cricket speaker on the after dinner speaker circuit.

Following his retirement as a player, Mike Procter has gone on to work as a ICC Match Referee and has never been far from controversy, officiating the infamous match where Pakistan were accused of ball tampering along with being at the centre of a disciplinary manner involving Indian spinner Harbhajan Singh which Procter was later scrutinised for with his integrity being brought into question with claims of racism. With a truly prolific career as a player coupled with a controversial time as match referee make Mike Procter an incredibly entertaining and intriguing cricket speaker. With a host of tales and anecdotes to share from his extensive knowledge and experiences within cricket, Mike Procter is available to hire as a cricket speaker for any event, dinner or cricket occasion.